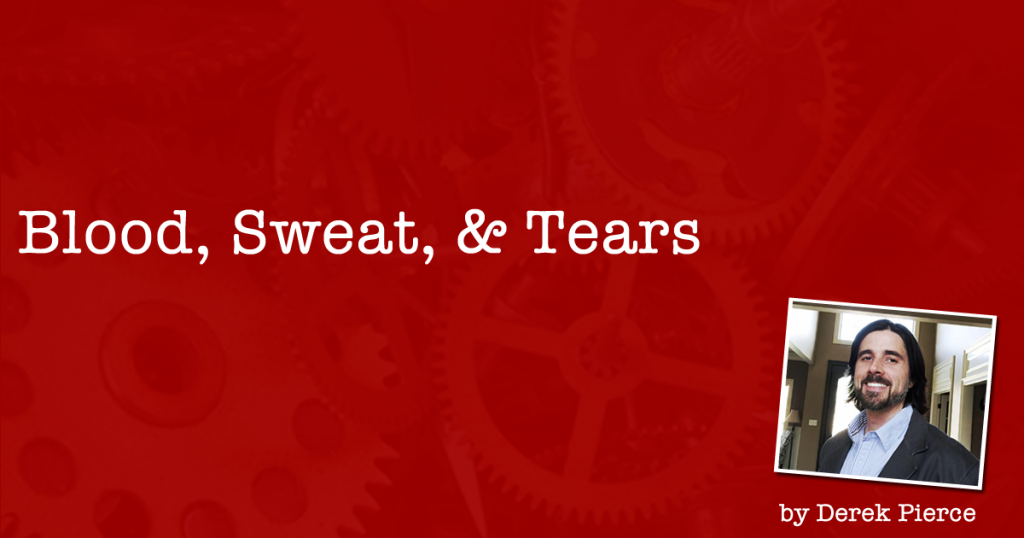 My start online wasn’t all sunshine and roses.

You’ve heard about the wiz kid that rolled out a product and banked 100K in days or the video game player that banked $7.4 million in 2014 from yes – playing video games.

Mine was completely contrary to those…

There was a lot of sweat and tears that went into building my online business.

And that’s a huge positive.

Which is why I love this business so much.

Seriously, the upside is huge.

Nothing compares to the profit margins you can see from online marketing no matter if your selling your own information products or selling them as an affiliate.

And it’s not hard work.

I’ll get back to that in a moment, but for now it’s story time!

When I was 17 years old, I picked up a hot, summer job at a furniture plant here in Alabama.

My job was simply to clean up.

Sweep up sawdust, take out the trash, and stack the furniture parts on pallets to get ready for shipping.

Nothing to hard – just work.

The plant had this machine that would duplicate chair legs.

You could put a chair leg in and it would replicate 8 -10 legs just like it.

Underneath this massive machine, there was another machine with vents that sucked out the sawdust from the plant and into a big bin.

Every few weeks, a dumpster would arrive underneath the big bin and my job was to climb in the back of the truck, grab a big stick and jam the packed sawdust to loosen it so that it would fall into the truck.

It was in my nose.

And even in my socks and shoes.

The dust seemed like a big swarm of bees being dumped on you.

And you were already drenched so it stuck all over you.

Going home after that I’d blow these black chunks out of my nose.

But hey – I was making $2 more than minimum wage.

It was mid morning, just after a break and I was doing my normal cleanup routine.

I was talking to the bossman, Larry at the time.

He reeked of halitosis from all the cigarettes – and he always talked to you with one partially hanging from his lips while he looked over his coke bottle glasses over his nose.

Alvin (one of the older co-workers) was taking chair legs out of the duplicator machine.

All of a sudden, Alvin takes off running through the plant screaming in pain.

“What the hell just happened?”

I had no clue what was going on.

As I looked up, I saw Alvin holding his own hand with a bloody end.

Everyone started running to tend to him in panic mode and I shut off the sawdust sucking machine.

And then I was given strict instructions.

Larry, as he looked over his coke bottled glasses, still with the cigarette hanging on the tips of his lips –

“Derek, get under the machine and find Alvin’s finger!”

Uhhhh, Do what now?

“Oh and while your at it – clean up the trail of blood too!”

A virgin, bit of a dork who felt he’d been dropped in the middle of the lion’s den anyway.

It was my first real experience with the world away from loving, but overprotective parents and church every time the doors were opened.

And now, I was in charge of locating a man’s fingers that had just been hacked off by a saw.

I crawl under the machine and find the fingers to get them on ice.

While I was holding them in the palm of my hand I took a quick looksie at the man's severed fingers.

Even though, I was totally grossed out – that day left a big imprint on my life.

I made a commitment right then –

“I’ll never be in this position when I get older. “

I didn’t have a clue what I’d be doing – but I knew there had to be a better way.

So, when I say that no blood is a positive thing-

I really mean it.

Hold another man’s finger in the palm of your hand and then clean up the trail of blood.

But getting back to my start.

My first money making venture was selling houses on ebay but that was only used to get out of properties I couldn’t give away here locally.

I’ll save that story for another time.

But that opened a door and created a burning desire to start making money online.

Only thing was – I had no experience with computers outside of gaming, and using Microsoft Excel.

I started by selling my ebooks that I had written, building a list, blogging, article submission, PPC, and even SEO.

The fact is I made some HUGE mistakes…

And it wasn’t until I made a huge shift that everything started to really click.

That’s what you’re going to hear me talk about over the next couple of weeks.

So, be sure you’re on the email list and look for the email I’ll be dropping tomorrow.

And be sure to watch your fingers – it helps when it comes to typing.

Now – type me some comments below…

Ahh, nursery days, nursery days. I too would be standing on that assembly line or cleaning up with you (fortunately not the fingers) and said to myself multiple times I’ll do anything to keep me from doing this the rest of my life.” You’ve come a long way Derek. And to think, you quit that job to play basketball and watch MTV the rest of the summer.

haha – did you expect any less? That was the first time we’d had MTV

Sounds like we all had very similar summer jobs. I can remember long hot, boring as hell days working at MZH. Jobs varied daily, hourly it seemed; packaging, shipping, stacking bags, bidding from bosses ( yes that was a job), and the worst… hauling trash to the City Dump. Come to think of it it really wasn’t bad at all, it got me away from the plant.

Derek- keep it up. Sounds like your on the right track. I believe your 100% correct in that an online business model is were it’s at, limitless income, not geographically fixed to one spot, and as few employees as possible. My idea business.

Looking forward to seeing where this journey takes you.

Hey Jason – so good to hear from you! Long time no see.

Hope everything is going well 🙂

Your story really resonates. During college, I worked as an aide in the school district’s special-ed program, but over the summer months, I was a “helper” (grunt) for the district’s HVAC crew. A primary reason for being there, I observed, was because they needed a young man to do jobs the old-boys’ bodies just couldn’t do anymore. (It’s been a litany of mine ever since: “Doing young man’s work is fine, as long as you are a young man. But it’s really lousy to be an old man doing young man’s work…” My sons have heard it countless times.)

It was a great summer job because every June I was really sick of classrooms, tests, etc. But after a summer of crawling through a 100+ yards of asbestos-contaminated pipe-chases to rebuild a steam traps (and other assorted fun projects), I was very ready to get back to school so I wouldn’t have to do that kind of work the rest of my life. It was a very good experience. (Oh, and I nearly lost the end of my ring finger…)

Great share.. Those experiences are extremely valuable because they leave an imprint. I remember that day that I picked up the finger like it was yesterday – I swore on the way home that I had no idea what I was going to do but I wasn’t going to be stuck doing anything like that.

And now when I get bummed or something doesn’t go exactly as planned – I always think back to the hot summer days with sawdust covering my body and having to clean up the trail of blood and picking up another man’s finger.

It really puts it all in perspective then 🙂

Yep. It’s been nearly four years since I started bootstrapping my marketing/communications consultancy. Plenty of sweat, and occasional tears, but no blood! I will say, though, that on those difficult days, being positive, optimistic and energized must become a conscious decision.

I show people strategies I use to get traffic with Google and how I make money online. I’ve also released several pieces of software to help streamline the SEO process.

Interesting. Over the last three years, I’ve been boot-strapping a marketing and communications firm in my small market. The good thing about that is I’m pretty much the only game in town. The bad thing is that while there is a need for what I can do, the awareness of that need is only gradually developing…. That said, things are coming along.

The bottom line, is that I try to provide my clients the benefit of my knowledge of how to communicate with their most valuable audiences. I’m always scouting for new ways to accomplish this. So far, on-line engagement has provided limited utility because of the small geographic focus. That said, I don’t believe that’s how it will stay, and I’m keen to be ahead of the curve with it. I look forward to seeing what you’re doing and watching for opportunities to either apply it to my own operations, or offer direction to clients.

BTW, I’m curious to see and learn more about what you do.

WOW… forgot all about that type of work, until reading this. Have to share. For me, after HS in the summer, I was building roof trusses at a factory. You’d hammer all the wooden joints together with a large metal plate, which had multiple razor sharp teeth. Quite a few cuts there, but the killer was the machine press you put the truss in that squeezed the plates together for the entire truss. Two large rolling drums at waist height, like an old fashion washing machine ringer, only each drum was about 3 feet in diameter. Well, sometimes you would jump in the middle of the truss to carry it over to the press. (They were very long. Just look at your roof from the side of your house.) So if you didn’t have enough people holding it up to help carry it over, you got in the middle for more leverage. Of course you’re suppose to get out as the press is pulling the truss through. But that could be just a few feet before it pulls you through. Everybody did this, but the story was one person didn’t make it out in time. Now this was before I started there. And thinking about it now, I have to wonder if it was true or just a scare tactic. Either way, gruesome to think about. But no question it would flatten you out. Glad today that I’m typing away with all 10 digits and not doing young men work. Too slow these days to move that fast.

You have my attention! Can’t wait for the rest of this series! THANKS for taking the time to motivate others!