Black, White, Gray – Which Hat Do You Wear?

“This is completely white hat.  And I've NEVER been hit with an update.”

I wanted to crawl under my desk.

It wouldn't have done any good – I have a glass desk.

I couldn't believe what I was hearing.

So my options were to start a big scene on the webinar or let it play out and just get the hell off the call as soon as possible.

I chose the latter.

The webinar ended and I refused to send a replay.

I ruffled a few few feathers because of my decision to end the promotion early.

And by no means am I judging the guy.

He's not the only one doing this.

And that's not what this is about…

The promoter was simply telling people what they wanted to hear.

I had 2 issues with the statement and I'll explain a little later in the post.

But my point is –

“What does it really matter?”

Seriously, why is it a big deal if it's blackhat or whitehat?

Does the bank ask if you used White hat or Black Hat SEO before they will cash your checks?

See, I don't make the rules and neither do you.

We're all in this together and I view ranking as a game.

Then you keep doing what's working and drop the other.

They're scared to death to fail.

They play the what if game in their minds only to end up being more confused.

With SEO, they're afraid of messing up.

Most have to know all of the information before even getting started.

And as a result, they fail to do anything at all.

I'm not preaching at you either because I've been there and been guilty of the same thing.

And, occasionally I'll find myself falling right back into that pattern and I have to have a talk with myself to quit being a puss.

Now, getting back to the presentation and the “issue” I took with what he said.

First, the software we were promoting would be considered “Black Hat” by all accounts.

And that's ok that it's blackhat.

But don't try to cover it up and say it's completely whitehat.

Anytime, you're using attempting to game the search results or manipulate your rankings – it's considered by many to be blackhat.

Secondly, if you've never been hit with any of the updates – you're not a real SEO'r.

You're not pushing the boundaries.

You're not testing new strategies.

I'll be the first to admit that I've been penalized and even have had sites de-indexed.

Actually I had 2 sites just last week in one of the Google updates.

That's why I'm here writing this blog post and why I've had success.

I've suffered a few bumps and bruises but I've kept trucking along.

Here's my outlook on the matter –

You can't lose what you don't have.

If you don't have traffic, then it's not yours to lose.

And that keeps me hungry to test new things across different sites, videos, and social properties.

You've heard that before right?

Well, chances are you've got a quality site.

You've probably put real work into it and if you've not done any off page optimization – chances are slim that you've seen any movement.

Take a look at this site where I just focused on quality content.

Over the course of the year – can you guess how many terms we were ranking for?

If you suspected – ZERO, then you're the grand prize winner.

You can see the screenshot below: 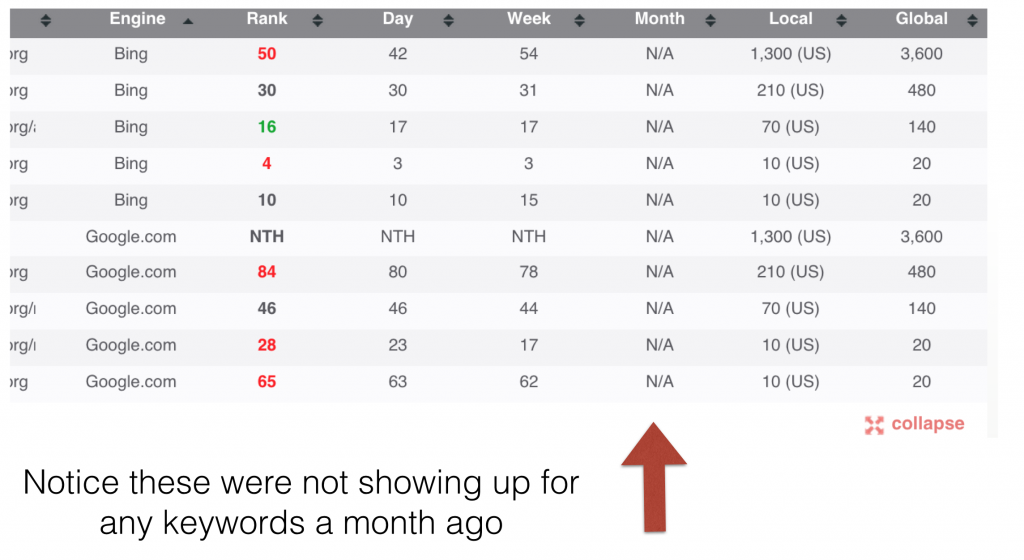 See all the NA's on the month column.

We were not showing up at all for any keywords in Bing or Google.

So – one thing is for sure – don't take Google at their word.

They're not going to give you the goods…

Think about it this way…

It would be like walking up to the creator of Coke and saying – “hey – this taste great- any chance you can share that recipe?”

You know it's not going to happen.

So, enough with the hats – throw out your blackhat, get rid of whitehat and gray hat- how about we focus on Green?

As in the color of money…

Because that's what this business is all about – right?

I mean that is why you're reading this…

You want to see results.

See, I've found 4 linking strategies that are currently kicking butt and taking names – and you don't have to be “super blackhat linking ninja” either.

Not that there's anything wrong with that…

It all depends on the angle as to which one of these linking strategies work.

If you apply the wrong approach, then you can do more harm than good to your website.

See, there's no cookie cutter approach for every site that we launch.

I've condensed this down into 4 different linking strategies for you depending on what your goals are and what your overall strategy is.

And this Sunday, you'll have the opportunity to see these 4 linking formulas that I'm referring to as “Green Hat” Linking.