The Rich Jerk Launch and Promotion 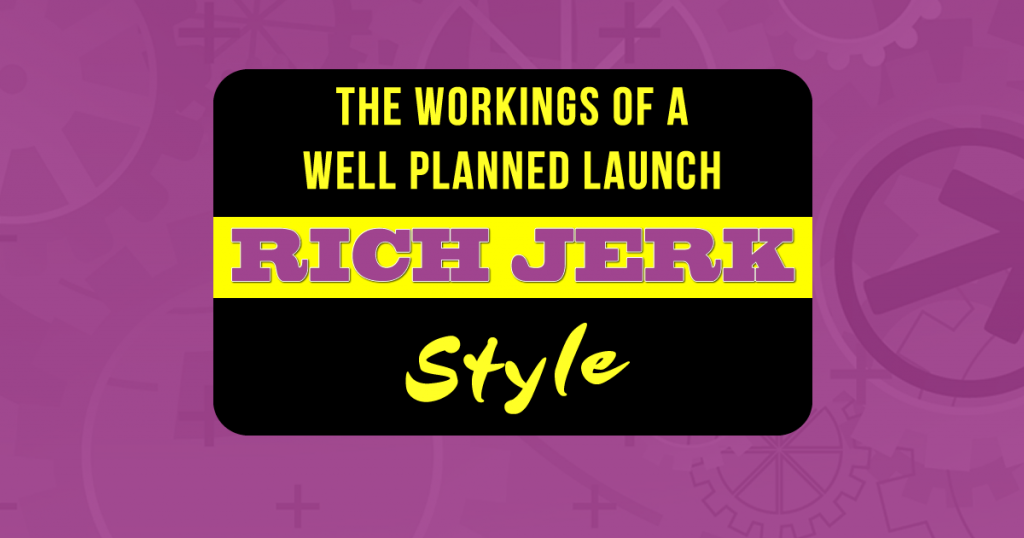 If you're not familiar with the Rich Jerk, then you're about to be.

The Rich Jerk was a popular internet marketing course a few years ago that everyone loved to talk about.

You either loved it or hated it – but the bottom line is – You Could Not Ignore It!

I've seen a lot of launches in the internet marketing space, but this one is a bit different just based on the approach.

If you want to see how to launch a product, then get a pen, pad and watch Kelly Felix as he's bringing back the Rich Jerk.

In the last week, I've seen the RJ launch dominate an entire space.

And it's still a few weeks away.

Normally, here's how a promotion goes…

Hey Man, What's Up?  I've got a Super Hot Offer That's Converting Like Hot Cakes and Going to Make You A Gazillionaire in 24 Hours And You'll Wake Up With Not 1 Hot Blonde But 2!

Now, I'm not criticizing because I've been guilty of the same stuff in the past when I didn't know any better.

But The Rich Jerk promo is way different.

They're sending out promo packets to super affiliates and thought leaders in the internet marketing space with Rich Jerk gear.

And as you can imagine, everyone is taking photos, making social media posts and sharing the Rich Jerk gear.

It's different and extremely unique.

But most importantly – it's getting Attention in a crowded market.

It's all about getting eyeballs.

Attention is the name of the game.

And you're about to see RJ take over an entire space with tons of emails and social media posts.

That's why so many are talking about your ‘personal brand' these days.

It's all about Attention!

The difference maker in the launches that really blow up revolves around the fact that there's really 2 launches going on.

One afternoon, I get a note in my Post Office box stating I had a UPS package.

I was pissed because the UPS store is only open for a few hours in our neighborhood.

“DAMN! I've got to go to the stupid UPS to pick up this dumb package”  was my initial thought…

I get there, open up the package and it was a hand written note that said something like this…

“Hey Derek – I've got something cool happening soon.  I'll be sending you more details in a few weeks.”

That not only got my attention but I also stopped dreading going to the mailbox or UPS.

The IM space is full of shitty products, poorly planned launches, and even worse support.

So, I'm glad to see a well thought out promotion in the works, in real time.

And happy to see cool launches like the Rich Jerk or what Preston pulled off with Freedomsoft years ago.

I'd recommend watching what's going on with this promotion if you're into launches or into selling your own stuff.

You'll learn a thing or two.

And here's to better launches in the future…